Continue to reading “Skin in the Game”. As previously wrote , it continues to read like a Blog entry, or rather a collection of Blog Entries.

But nevertheless, I still enjoy reading Nicholas Taleb.
Now reading a Chapter about companies and employment. Why companies choose to have employees over contractors and the “Skin in the Game” for the employees as well as employer.

Example was given about the “Expat” status, which Taleb claims resembles Slavery. Relocating a person to a foreign country and giving a very good package/standard of living for the employee to complete a task which he is unlikely to abandon.

Love this way of thinking.

Overall employment in modern companies is one-sided, where employees get a false sense of security.
Some social countries and regulations enforce more “Skin in the Game” for companies, but there is no equality in the pain of separation and balance of power.

“Realise the potential”  is American Express’ slogan in Japan.

Sounds good, but really bothers me they use “Realise” instead of “Realize”.

As far as I know (and also checked the web), “Realize” is the more common form in the US, so I found it odd that a company called “American Express” uses different spelling

As previously blogged, attended an OpenGov session focusing on AI .

It was very interesting to understand where different government organizations are at and how they interact with academia, what are their needs and future plans.

As this Blog is all about me, try to find me in two photos.

Oh well, I’ll help you with one.

Enjoyed participating in the Opengov breakfast insight session on AI.

Will wait for the official report and share it.

Took one photo while our photo was being taken, I like the composition and intensity of the photo so decided to share it 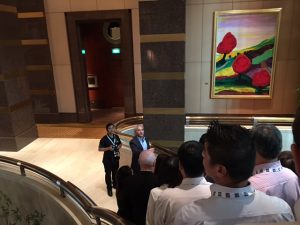 Logic board was replaced. Effectively this is a new computer (except the screen). Obviously, the flash contents was not copied to the new board.

Received the MacBook Pro and could restore it from Backup. It seems to be working ok and I am using it to update this post.

Now, there is another issue that I am discussing with Apple support team.
In my last visit at the shop I also handed them my HDMI and Ethernet Adaptors so they can verify that the system is functional in the same manner I work with.
These accessories were not returned to me yet and will be shipped today to my home.

Since I moved to Japan I have been using MacBooks and MacMini. Several generations of both and a very happy customer.

Last year November, I purchased the new MacBookPro immediately as it came out. Upgraded the processor and memory since I plan to use for work and photography hobby.

All was great till several weeks ago when I noticed that sometimes Battery does not charge. A reboot usually solved the problem so I thought it was a software problem.
But then it stopped charging. Reboot, SMC reset did not work.

First visit Apple Shibuya
Monday. Went, waited, waited. A very nice guy tested, experienced the problem and then explain to me that they don’t have parts, Apple does not keep Parts in their repair centers (!!!).
Which means I have to give my computer and wait till parts arrive and computer fixed.
I did not like it, so we agreed that I will take the MacBook and use it while connected to Power.

From the net I learned that the new MacBook Pro design has limitations: cannot change battery without replacing the cover, SSD is soldered to the logic board
It seems Apple has done some compromises in the design which makes it problematic to service.

The only problem is, it did not work.
Parts arrived.

Third visit Apple Shibuya
On Friday (same week) received a call from Apple Shibuya which I could not take. Tried to call, but could not understand what was the problem.
(And here we have another problem, no English phone support in Japan. All calls are routed to Australia which means they don’t know exactly what was wrong with my laptop).

Went to the shop, talked with another nice guy that explained to me that the MacBook was fixed, but during diagnostic tests, they see trackpad issue.
“You would probably won’t notice, but it is a problem we need to fix and we don’t have the parts”.
We agreed again that I will take the laptop, use it with a faulty trackpad and return when the parts arrive.

BUT, next morning (Saturday) I notice the battery does not charge again.

Fourth visit Apple Shibuya
Saturday noon rushed to Apple to give the MacBook.
The same nice guy was there, saying the parts arrive and that it will be fixed immediately and shipped to my office on Monday.
Received a call on Sunday that indeed it was fixed and no error.

Macbook arrive to my office Monday morning, seemed to work, but I noticed once when I plugged power that it was “no charging” before changing to charging mode. Strange.
Next morning, same issue, battery is not charging.

Fifth visit Apple Shibuya
Tuesday morning, waiting for the shop to open so I can give the MacBook and rush to my meetings.
Will not accept anything but a new computer.

If I get a new computer, this will be my last Apple MacBook

A sweets shop was closed yesterday in Shinjuku.
Though I usually don’t eat sweets, the smell of this shop brightened my mornings.
Walking past it, seeing the preparations for the day, smelling the sweet sweet smell.

Afternoons were different. The same sweet smell, this time with people (mostly women) buying something sweet after a long day at work.

A different subject than usual, and obviously expressing my own opinions.

Cray published their Q4 and 2016 full year results , which gives some insight into the volatility of their business.

Actual results for any future periods are subject to large fluctuations given the nature of Cray’s business.

Revenue in the first quarter of 2017 is expected to be approximately $55 million.

As an amateur investor, I would not invest in Cray stock. Volatility and uncertainty are scary.

What I fail to understand is analysts opinion that still rate the stock between Buy to Strong Buy (Closer to Buy). Am I missing something

As I am interested in purchasing “Sleater Kinney” ‘s new album “No Cities to Love”, I checked Amazon Japan,  Amazon US and iTunes for prices.

1. Japanese version has one additional song “The Fog and filthy Air”

Was interesting for me to compare the GDP per capita between Israel and Japan.

While Israel is growing, Japan is shrinking. 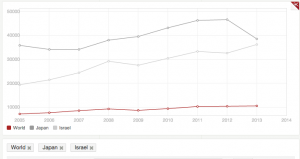 Or maybe rather, the power of Marketing.

Although most of my work is Technical, discussing Technical details with extremely Technical people, I am sometimes surprised by the Power of Hype.

It is not about the latest SmartPhone or gadget, but it is sometimes about latest Technology trends. Even when there is not much behind it, I notice it is being discussed and considered because “people talk about it”.

One thing that I can’t do is “object the Hype”. I can explain it, talk about it, but I can’t say “this is Hype”, because I will be considered “uninformed” (or maybe “not cool”)